Merri
Domestic Short Hair
Home
Browse Available
Cats and Kittens
Adopting From Us:
How to Adopt
Adoption Fairs
How You Can Help:
Fostering
Donate
Volunteer with Us
Our Wish List
Success Stories!
Successful Adoptions
Happy "Tails" from our Adopters
Rainbow Bridge
Helpful Information:
Feral Cats
Caring for Orphaned Kittens
Rescue Links
Contact Us
About Us
Board of Directors
Email Page to Friend 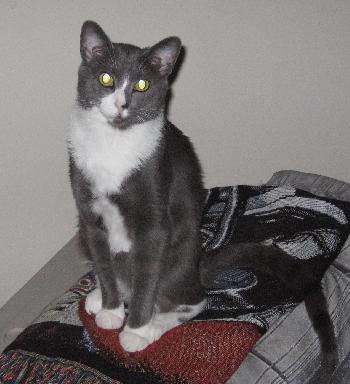 Achilles: Born in DC.  Originally named Mr. Grey.  Adopted at 9 weeks and became the first cat his dad ever had.  Spent his whole life as a leader and beacon of joy and energy.  Beloved friend and companion for almost eight years who always responded to his name.  Warm, gentle, devoted, clever, handsome, and unique.  Got along with all people and all his furry siblings.  A 5-tool cat who had all the skills.  Taken suddenly from this earth due to cardiomyopathy.  Missed terribly by his daddy, mommy and feline brothers & sister.  Much like the Greek warrior for whom he was named, he died far too young but his name and memory will live on through the ages.  There will never be another Achilles.  We love you buddy.  You will always be papa's boy.  (9/1/2004 - 7/27/2012) 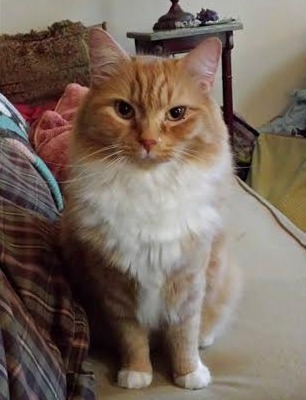 
Rescued in 2010 and named after the star of the popular children's book "Orlando the Marmelade Cat," we instantly loved his gentle, sunny personality, wild kittenish ways and easy adaptability. He proved us right when Erin and Ted adopted him and brought him home with another FFGW kitty and the two kitties bonded in record time. Our hearts are broken for Erin, Ted and Simone and we thank them for giving Alvin the most wonderful life a kitty could have. Here is Erin's heartfelt tribute:

- Him meeting us at the door, every time-  The climbing, the leaps  - The flying wallendas from the

grass appears- Inspecting the food bags - Him bugging me for kibble, every night-  The middle of

the night romps with his sister, Simone - Him and his woobie - His unbridled joy when jumping

around the bed chasing feathers - Him chewing on Erin’s pill boxes -  Headbutts all the time, to

say hello, I love you, or just because - Him on Erin’s pillow every morning - Shredding toilet

paper, his sculpting -  The kibble bags he chewed through - His chirping - Helping make the bed

paths and carrier landings - Lick, lick, chomp - Sitting in the window waiting for me - Always

curious - Helping me repot plants - Wearing his reindeer antlers - “Alvin get down from there!” -

leash; unchaperoned, at night, in the snow, during a power outage - Our greeter - Falling into

the giraffe, the edges, on anything he could - His head smelling of rosemary - Smelling of the

outside when he’d come out of the window - Taking on the grandfather clock and the treadmill,

supervising - Mr. protect this house and his family - Zen kitty - Pawing at the glass doors to get

Foot biting alarm clock - Simone and pointer, pell-mell into Alvin - His dismount from any high

place - Burning his paw on a hot stove top, and still getting about - Running the numbers to see

if he can get from A to B to C – Alvin in a box, laundry basket, or any other item with sides –

his back, foot stuck out – Just wanting to be with is peeps.

We’re going to miss you lots big man. You made us laugh, you made us fuss, but you always did

it with love. See you on the other side.   Love ya, Simone, Ted and Erin 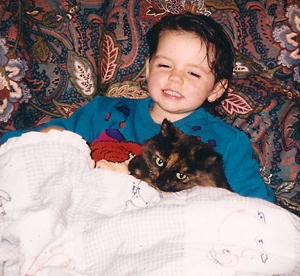 Ancie
Miss Ancie Malley, pictured in this photo from 1995 with my daughter Mary, died on March 30, 2010.  Some time this summer she would have turned 18 years old. Ancie came to us out of the woods in Vermont.  We arrived one evening at a cabin there when our two daughters were babies, and the third daughter (the one in the photo) not yet in the material world.  The little kitten must have slipped in unnoticed.  But it seemed like she was already inside before we opened the door for, when we got the lights on, we could see the tiny creature that went with the big meow.  She was very tiny, perhaps 4 weeks old. She slept with me that night, nestled in my hair, kneading my head rather painfully (for me).  Next morning, her mother appeared from the woods and lead her away.  But in the evening, the mother returned and dropped her off.  This happened two nights in a row and the day we left, the kitten was not around.  Yet, our friends who owned the cabin returned later in the week, called me, and gave me the kitten.  My oldest daughter, who was 3, named her. This cat spent much of her life being independent, a big hunter out of doors, and a gentle creature indoors.  She was sweet.  I am really just awestruck when I think that she was the animal companion that I had longest of any.  It's so weird to look back on those 18 years, to think she was here when Mary was born, watched these kids grow up, accepted two doofus dogs into the house, and lived cautiously around an older, cranky cat.   I don't know how you can spend the most years you've ever spent with an animal companion, and still feel like it wasn't enough when she's gone.  I still look for her in the usual places and anticipate her greeting when I come home from work. But I am glad for the opportunities to post my memories here. - Kathryn Malley

Angel
Our dear Angel, we miss you so much now that you are no longer with us. Your life of 18+ years was quite a journey I’m sure. We only got to spend almost 6 years with you & we hope you enjoyed them. Your mom misses you so. Your illness was so sudden that we are feeling a little shell shocked over your passing, but we know how tired you were. It was only two & a half weeks ago that you were fighting for some of my fried chicken. I wish I gave you some…more. We all love & miss you so big guy. Till we meet again….. I’ll bring the fried chicken, OK. Love Dad, Mom, Harmony, Dillen, & Lucky 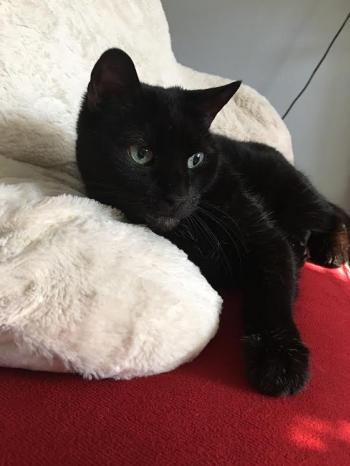 
I lost my beautiful Anise (known as Mulberry by FFGW) on September 19, 2018 and truly miss her.  Every time the phone rang she would come sit next to me and expect to be petted.  If you stopped petting, she would swat your hand to remind you to keep going and if she thought you were scratching the wrong area she would head butt your hand to the right place.  I really miss my phone buddy but am very grateful for the wonderful 17 years were shared.

We need you!  Give online, give at work, please give!